To celebrate #HerLastSecret going on sale, I’ve asked authors to share their secrets with me… Today it’s MARY-JANE RILEY, author of After She Fell and The Bad Things.

Mary-Jane Riley wrote her first story on her newly acquired blue Petite typewriter. She was eight. It was about a gang of children who had adventures on mysterious islands, but she soon realised Enid Blyton had cornered that particular market. So she wrote about the Wild West instead. When she grew up she had to earn a living, and became a BBC radio talk show presenter and journalist. She has covered many life-affirming stories, but also some of the darkest events of the past two decades.

Then, in true journalistic style, she decided not to let the facts get in the way of a good story and got creative. She wrote for women’s magazines and small presses. She formed WriteOutLoud with two writer friends to help charities get their message across using their life stories. Now she is writing psychological suspense, drawing on her experiences in journalism.

In her spare time Mary-Jane likes to walk the dog and eat a lot. Good job she likes walking. 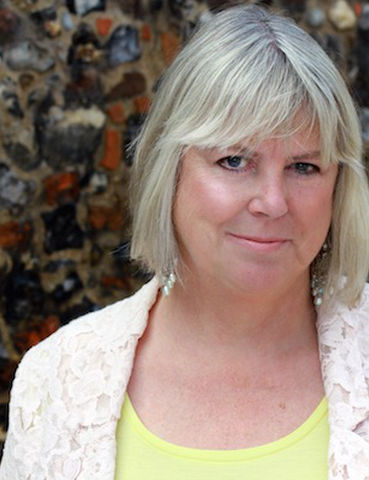 I discuss difficult elements of my plot with Reggie and Bella, two very discerning golden retrievers…

Secret celebration when you finish a WIP…

The celebration cannot be secret… much wine is drunk!

Anything (well-written) about zombies…..

…. following on from above – The Walking Dead

I used to be a model.

I feel I should clarify that statement – as an in-between school and university job I worked at a studio where they photographed gifts for a charity catalogue…. I modelled a rather nice pen! So, strictly speaking, it was only my hand in shot….

Secret peek into your new WIP…

My third book will be out in March next year… hurray! At the moment it’s called Dark Waters, but that could change! I have also bought myself a beautiful new notebook for a secret project that no-one knows about, so don’t tell anybody…..

Secret Santa… (If you could give a happy ending to any character who would it be, and what would you do?)

Have Jack Reacher (Lee Child’s hero) meet a lovely woman and settle down have a family, stop his wandering… hang on, that would stuff Lee Child’s golden goose…. and leave me bereft….

THANKS FOR THOSE GREAT CONFESSIONS, MARY-JANE!

HER LAST SECRET is out on Friday 13th October. Lucky for you – unlucky for the Thomas family…
To pre-order or find our more, use the links below.
UK

Some secrets you can never tell.

Everyone thinks the Thomases are the perfect family: grand London house, gorgeous kids.

They don’t know wife Dominique is a paranoid wreck.

They don’t know husband Ben is trapped in a web of deceit.

They don’t know daughter Ruby lives in fear of the next abusive text.

But someone knows all their secrets.

Can the lies that bind them destroy them all?

This dark, gripping psychological thriller will have you holding your breath until the very last page. Fans of Behind Closed Doors, Sometimes I Lie, and The Girl on the Train will be captivated.

See what readers are saying about Her Last Secret:

‘OH MY WORD! This is a fantastic read!… I was totally immersed in the Thomas family’s story… Outstanding, I highly recommend!’ Chat About Books

‘Absolutely superb, she’s only gone and done it again – did NOT want to put this book down!!’ Donna’s Book Blog

‘I absolutely loved this well-written emotional rollercoaster, the twists in the story keep you hooked, trying to work out what happened that night. Highly recommended.’ Nicki’s Life of Crime

‘Wow what a fantastic book, totally thrilling and captivating! A tangled web of lies and secrets is masterfully woven in this psychological thriller…I was hooked right from page one…a big fat 5 stars from me, I totally recommend this book.’ Bonnie’s Book Talk

‘This is one hell of an engaging read…I am blown away. I cannot recommend this enough; it is without a doubt a must-read book. Giving it a massive 5 stars.’ Chelle’s Book Reviews

‘It grips you by the throat and doesn’t let go. A tense, edge-of-your-seat, nail-biting ride’Robert Bryndza, author of The Girl in the Ice and Cold Blood

‘Vividly written and absolutely gripping. I couldn’t put it down!’ The Genre Reader (5 stars)

‘There are plenty of twists and turns that will keep you guessing, leading all the way to a jaw-dropping ending that left me spinning.’ Novel Deelights (5 stars)

‘Gripping and shocking. Had me completely enthralled in the action…a story that got under my skin.’ Rachel’s Random Reads (5 stars)

‘A dark, compelling and unforgettable read that had me hooked. The final paragraph haunted me, long after I had finished reading.’ Brew and Books review (5 stars)

‘Addictive, Thrilling, Captivating! I could not put this book down, it captures your interest from the very first page until the very last.’ Book Reviews by Nicole (5 stars)

‘It really did make for some very emotional reading…There was a twist which totally rocked me.’ By The Letter Book Reviews

‘Plenty of red herrings and twists…If you like psychological thrillers, you’ll love it.’ Consumer reviewer (5 stars)