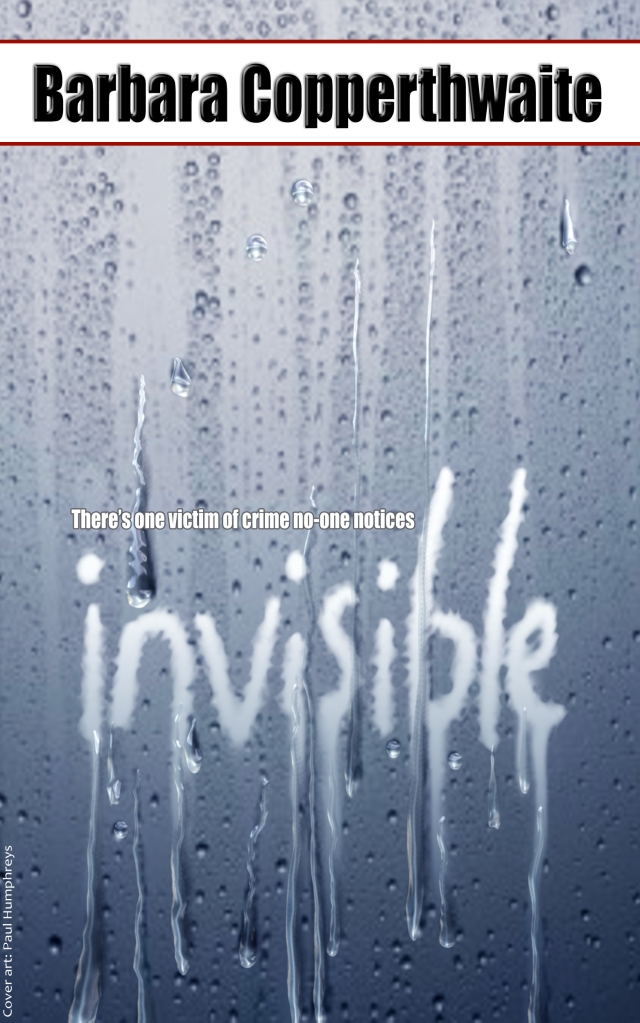 As my new novel FLOWERS FOR THE DEAD nears the end of the editing process, I thought I’d share an extract of my debut novel, INVISIBLE, which was an Amazon Top Ten bestseller. I’m sure there are still plenty of people out there still unfamiliar with it 🙂

It is a psychological crime thriller about a woman who thinks her biggest problem is deciding whether or not to stay in a boring marriage. Then one day she and her husband are arrested and she becomes the most hated woman in the country through no fault of her own. Does she have the strength to survive?

There really isn’t a thing to say. A year ago I’d have tried to say something. I’d have wracked my brain to find some inane comment to make. Probably about the programme we were watching. We’re both sitting here watching the news, maybe I could say something about one of the stories…another soldier killed in Afghanistan, a big company announcing job cuts, the Prime Minister visiting a school somewhere or other… Not exactly light, chatty topics.

The newsreader’s voice drones on, but I’m finding it hard to concentrate. I wonder if Daryl will get curious about this diary and decide to have a sneaky read. I hope not, but it wouldn’t surprise me; he hates secrets, likes to know everything that’s going on in my head. Just the thought of him reading this though…damn, I’ve crinkled the paper, my hand clenching at the corner just at the thought of what he’d say. He’d be furious. But I’ve got to get my thoughts out somewhere, haven’t I? I can’t, simply can’t face talking to him about this. Not yet.

From the corner of my eye I can see Daryl glancing at his mobile, thinking I won’t notice. Or maybe he just doesn’t care any more whether I noticed or not, in the same way that I’ve stopped caring about filling the silence between us. So, is it just me he doesn’t have anything to say to any more? Are there other people out there that he actually bothers communicating with properly?

Funny how I have so much to say to myself. In my head I can’t shut my internal monologue off. Is this what happens to all marriages? Slowly but surely you just run out of interesting stuff to say and slide into the mundane, and finally into total silence. Like those couples in restaurants, who are clearly only there because the woman has insisted on a romantic night out or she’ll kick off, so the bloke’s given in for a quiet life. And they sit there, opposite each other, one more dressed up than the other because the evening means more to them, and each making polite conversation.

Then silence. An awkward glance around the room, trying to find something to comment on. The waiter surreptitiously looking over, fighting a smirk at the desperate atmosphere at the table. The clink of cutlery on plates filling the pause that grows longer and longer. A throat clearing. ‘It really is very nice food…’

So I’ve started this diary, just so I have somewhere I can air my thoughts. Then I realised I’d nothing to put in it but the humdrum. Still, maybe that will galvanise me to actually do something to change my life, because on the very first, pristine page I wrote a little something, a sort of mantra I suppose, to try to focus myself.

If you’re not happy with something, change it; if it won’t change, get rid of it.

Doubt I will though– haven’t so far have I? Let’s face it, the vast majority of us start off in life thinking that we’re going to do something amazing with our time on this planet – didn’t Shakespeare or Oliver Wendell Holmes or someone say something about how ‘nothing is so commonplace as the wish to be remarkable’. Life kind of sucks you dry of those feelings though.

Actually it’s not even that dramatic, it’s just that all the other stuff of life gets in the way of really living; you know, the falling in love, getting a job to pay the bills, even watching telly, it all just conspires to stop you thinking about the big picture, and before you know it you’re married to a man you barely say two words to, in a house that’s all right but nothing special, in a job that’s…beige. Bland, nothing special or inspiring about it. That’s what happened to me anyway. Sometimes I think if something exciting doesn’t happen to me soon I’ll go mad.

Beside me, Daryl grabs the remote and switches over without even asking me after a report about some horrible rape up in Manchester pops up on the news. Sounds like she only just got away with her life. Do I pipe up, say something to Daryl about turning over, given that I was watching that? No, of course not. I can’t be bothered. How am I going to motivate myself to do the extraordinary when I can’t even be bothered to speak to someone sitting right beside me?

What is it with men and remote controls anyway? Why do they feel the need to keep hold of them? He’s sat there now, holding it, finger running over the buttons absently. I wonder if cavemen only had clubs because they were remote control substitutes?

* INVISIBLE is available as ebook and paperback on Amazon.